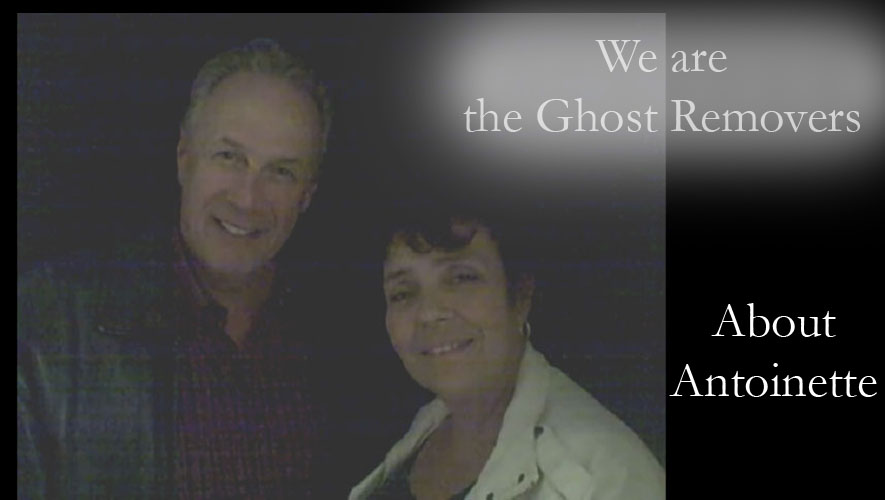 There are two pivotal experiences that influenced Antoinette in regards to the paranormal and psychic realms. First, Antoinette has always felt that she has a soft spot in her heart for the underdogs and the ‘throw-aways’ who she describes as the people who fall through the cracks. She has raised her own son and several other children who didn’t have a mom or dad who cared. For a time, she was a caretaker for young man named Mark. He is special needs as a result of an accident and traumatic brain injury. However, Antoinette feels a special affinity to Mark and finds him adorable. Antoinette explored hypnosis with Robert In attempts to understand Mark’s predicament and it did. That journey increased her awareness which led to the increased ability to access new levels of spirits and specialties.

Then, In 1999 Antoinette was experiencing disruptive and terrifying paranormal behavior in her home. It had escalated to the point where, one night, she phoned Robert Major for help. Robert came over and placed Antoinette into a hypnotic trance. In that state, she was able to communicate with the culprit that was ghosting her home.

Ever since, she has consistently incorporated trance when accessing her psychic abilities. She developed her trance-channeling ability to communicate to spirit guides for people that came to her for information from the spirit world. In time, spirit guides taught Antoinette how to work with them to remove ghosts. Additionally, spirit guides identify who else has this ghost removing ability and Antoinette trains them.

Ever since her early experiences, she has honed her skill to act as a medium to ghosts as well as channel to spirit guides. This is challenging because they exist on different frequencies. Over the years, Antoinette gained a familiarity and comfort level with her spirit guides to the point that she serves as a voluntary trance channel. In these cases she vacates her body and allows a spirit guide to possess it. This allows the spirit guides the ability to bridge both the physical and spiritual realms to perform difficult exorcisms.

At times Antoinette herself communicates to Robert and clients, other times, the spirit guide(s) speak for themselves through her body. The shift is identifiable by the phrases used. In the cases of ‘she said’ or ‘he said’ Antoinette is speaking to the ghost or spirit guide. When the term ‘I’ is used, the spirit guides is speaking itself through her body. It is these skills that Antoinette uses to help others. Importantly, these abilities enable her to recognize the ways and means ghosts apply them to their own advantage and victimize the living. Antoinette and her spirit guides have dedicated themselves to eradicating this problem.

Antoinette’s skills don’t end there. She has developed the ability to communicate with animals and often relays messages between them and their human companions. Other times, animals provide insightful and helpful information to help others. Realizing the Gift Antoinette has been keenly aware since she was 13 that she had a special gift. She recalls one episode in particular at this age when she had an especially vivid communication with a ghost. She recalls that the ability went away for several years but her premonitions were consistent during that time.

She always felt that one day she would use her gifts to help others. Ghost removing is her special way of helping others. Sharing the Understanding Outside of guest radio show and podcast appearances, Antoinette shares her gifts one-on-one with personal sessions. She appeared on a talk radio show along with Robert Major to entertain listeners with her ability to communicate with animals. Listeners were invited to bring their pets to the studio. They communicated with their animals through Antoinette. Additionally, Antoinette comes into her own in front of an audience. She enjoys entertaining on stage as a band singer and/or Karaoke singer. Her experiences there are invaluable for setting the stage as a performer.

DARKNESS RADIO – Robert and Antoinette have made several guest appearances on this station which focuses on the paranormal.

Local San Diego Radio Station – Robert and Antoinette made a guest appearance. Listeners brought their pets into the radio station. Antoinette facilitated communication between pets and their owners to the delight of listeners.