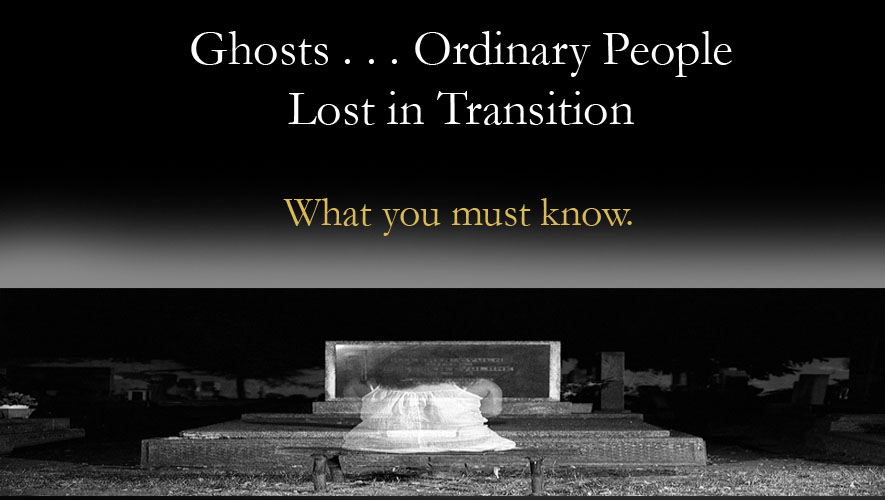 Ghosts were ordinary people who became lost in transition to the other side. There are many reasons they choose to ghost. There may be loved ones on earth they still want to be with and try to comfort. Maybe they are afraid to cross over because of they way they lived their lives and now upon passing they realize that karma awaits. Some ghost indefinitely and some will interact with the living in non-obtrusive ways. Then there are those who, once they find a vulnerable human host they attach to them. It may take numerous attempts before the person gets attached but once they are attached their lives can change dramatically. The ghosts once attached can subtly persuade and manipulate the individual causing behaviors totally foreign to that person. In time a ghost or ghosts can fully compromise and take them over. That is what we call a complete possession.

As a result, having an Attachment will be differing for different people. The effects will be specific to the individual based on the ghost that has attached and what their motives are. Influences range in severity. A mild Attachment could be there just to go along for the ride. Not wanting to pursue their own agenda at all. A moderate Attachment might influence a person’s behavior. Causing them to act in accordance with what the ghost wants to experience. A severe Attachment can take over a person and possess them completely for short intervals or long term.

There will be telltale signs of what is happening for those who know what to look for. In extreme cases you will see changes in the eyes. The voice may sound different. The body may even move differently. These symptoms become more evident in Attachment cases that have increased in severity over longer periods of time. If the person becomes weakened physically or mentally the attachment can take over easier. Often there will multiple attachments present which will cause numerous conflicts in the individual. There is normally one or two dominant ghosts and then there are subdominants. The subdominants help empower the dominants energetically.

Author L. Sims developed the following severity scale in an effort to explain what this looks like.

Absent: No Attachment Present A person feels and behaves in ways consistent with their personality. The experience of time is sequential without any gaps.

Possible: Possible Attachment of relatively low vitality whose influence is perceived as a nondescript minor nuisance. They may come and go in search of energy since ghosts do not create their own energy. Symptoms are temporary and can include unspecified mental, physical and/or emotional duress that seem to have no identifiable cause. Momentary lapses of time where one is lost in thoughts or impressions or self-indulgent in nature.

Mild: Evidence of an Attachment may begin to become apparent during periods of acting out of character. Afterwards you may wonder, ‘Why did I do that?’ or ‘Why did I think that?’, ‘That’s not like me.’ New desire to pursue a harmful or self-destructive behavior. Other symptoms can include: chronic, persistent vague stress, or undiagnosable physical ailments.

Moderate: One or more Attachments that influence how you think or feel though you probably aren’t aware of their presence. Lack of impulse control regarding recent new harmful or self-destructive desires. Lingering lapses of time where one is lost in or preoccupied with obsessive thoughts and impressions that are out of character with the self. Prominent: Parasitic Attachments of a prominent nature have achieved the ability to increase their own fitness by exploiting hosts for resources. In the case of ghosts that Attach, they can gain strength, even thrive, while the host is receding. In some cases, they may wait until they become strong enough themselves. Or, they may enlist or coerce one or more weaker ghosts in a hierarchical fashion with themselves at the top. The others can be used for energetic fuel or in order to gain strength in numbers.

In prominent cases, one or more Attachments could be present that begin to drive a person to the point of behaving in ways that is out of character. Their presence is evidenced by persistent and at times, preoccupying thoughts that are out of character for the host. Experiences may include: paranoia, disrupted sleep, nightmares, sleepwalking, significant and periodic losses of time, non-medically related blackouts with little-to-no memory of what occurred during that time, or uncontrollable impulses. A person may feel a strong desire to be with or otherwise finding themself with people or at places that are new and out of character. One may have unusual ESP activity such as: one may hear voices inside or outside their head. Or, find themself talking to people who ‘aren’t there’ but are there in spirit. Another sign of a Prominent Attachment is that one’s life spirals out of control but in actuality, the Attachment is in control during these times. At this stage, the most obvious indication of the presence of an Attachment in someone else is an abrupt change in personality. When an Attachment has reached the prominent phases, it causes people in the host’s life to question their perception and judgment concerning the person they thought they knew. At the same time, friends and family may be feeling things like: ‘I don’t know ‘you’ anymore. ‘How could ‘you’ have done that?’ or ‘S/he gives me the creeps.’

Severe: In the severest of cases, the intention of the invading spirit(s) is to displace the host completely. Ghosts that Attach learn from each incident and gain experience, strength and garner more authority over the body. Undiagnosed as a separate entity, even at this late stage, and without some sort of diagnostic reference , the host may still be aware of the foreigner. In Severe cases, one or more Attachments are in possession of the body most of the time. The person becomes sidelined during these times. The host spirit either watches helplessly as the Spirit Operator animates their body. Or, the host is totally out of their body and therefore has little or no recollection of the events that transpired while they were ‘Out’. This process accounts for times in which there is a complete change in personality followed by memory loss. Externally, there is increased evidence that, without realizing it, one passed through periods of unconsciousness during which someone else carried out activities unknown to the self. Later, the host is left to proclaim that ‘it wasn’t me’. Evidence that, (such as other people may say) you did ‘this’ or ‘that’, but you have no recollection of doing those things yourself.

In severe cases, family and friends my notice that there is noticeable shifts that stand out in the persons photos, most predominantly in their eyes. In some cases of complete take-over referred to as extreme possession, the spirit born into the body is no longer connected to it. Instead, the body is solely inhabited by Attachments. Most often, a few (one-to-three) are generally in charge. The dominant Attachment prevails and take over the body because the spirit born into that body leaves it for good. Hopefully the host spirit makes the successful transition to the afterlife. If not, they too end up ghosting.

In all of these cases so far, Robert Major and his Ghost Remover team have had to respectfully decline to perform a clearing because they and their spirit helpers have not been guided to make a determination as to which Attachment should get the body to inhabit as their own. Prominent Attachment and Extreme Possession are an insidious type of Identity Theft. Only it is your actual body that is stolen for a time while you are usurped. You become either a helpless bystander or are totally unaware that another spirit has taken control of your body and is, by virtue of their physical appearance, impersonating You! Attachment and possession are the crime that Robert speaks about when he says: “Attaching is a crime that we won’t tolerate.”

At the same time, friends and family may be feeling things like:

The most obvious indication of the presence of an Attachment is an abrupt change in personality.

Because of the invisible nature of ghosts, Attachment victims may not understand that they are the victim of this type of Identity Theft because most modern societies do not acknowledge that it exists. As a result, victims are often bewildered and frustrated. And, without credibility, with the exception Robert and his team, they are left with nowhere to turn for help.

The Ghost Removers mission is to expose the nature of these entities and help the living human beings they affect and the lost souls they encounter. Read about their journey into the spirit realm and case files in the book entitled: The Ghost Remover Chronicles by L. Sims (available in paperback and kindle on amazon.com)